Fylicia Barr is a top emerging equestrian athlete, who burst onto the US eventingscene in 2017 with her mare Galloway Sunrise.  Originally from Olean, New York, Fylicia Barr is a professional 4* event rider who operates a very busy training and competition facility, based in Chester County, Pennsylvania.

Fylicia’s days as a young equestrian were very diverse, as she dabbled in multiple disciplines including the local 4H, barrel racing, saddle seat, driving, equitation and the jumpers.  At the age of 13, it became apparent that her love for eventing would require that they search for the right competitive partner.  Little did her family suspect that the search would lead them to Galloway Sunrise, a half wild filly, that they found on Craigslist for $500. 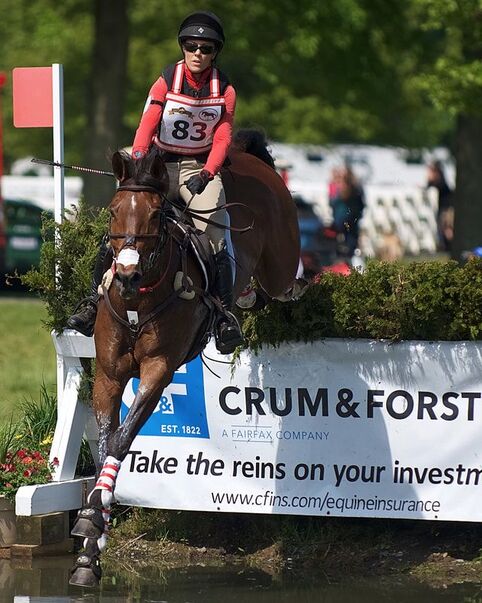 Jersey Fresh International. PC: Diana Rowland
The progression with ‘Sunny’ wasn’t always easy, and the early days of her training proved challenging, but Fylicia remained focused on creating a bond with her new horse.  The following is an excerpt from an article published by Lindsay Berreth, describing the early days with Sunny, from The Chronicle of the Horse in 2018.

“She was feral. Not in the way most people joke; she had not been handled by humans,” Barr said. “We treated her like you would a mustang. She lived in the round pen, and I brought her food, so I could create a bond with her. I tried to do a lot of natural horsemanship. The first time I ever went in the round pen with her, I remember she turned and chased me out of there with her ears pinned. I just scaled the fence as fast as I could! We knew at that point it was not going to be an easy road. She definitely put us through the wringer.”

During that period of time Fylicia was a teenager, and she persevered in her training with the assistance of her parents, Shannon & Dan Barr, and with local trainer, Joe Backer.  As they began to make progress, Sunny had an accident in the field and tore off the bulb of her heal.  The injury was significant enough to require more than a year of stall rest.  In retrospect, Fylicia feels this time off helped her mature and become more trainable.

When Fylicia was 18, she decided to follow her eventing dreams and went with  Sunny to Full Gallop Farm in Aiken to be a working student.  After a winter in Aiken, she relocated to Unionville, Pennsylvania in 2013 - freelancing at facilities until she landed at Sally Lofting’s as her assistant trainer.  Fylicia credits Sally for taking her riding to the next level and for filling the role as mentor.  She also credits Phillip Dutton for helping her make the successful move up the Advanced in 2017.

Since arriving at the Advanced level, Sunny and Fylicia have had a series of top placings and triumphs, culminating in their first FEI win at the 2019 Jersey Fresh International CCI4*L and finishing 3rd on the USEA/Devoucoux Mare of the Year list!   In addition, they have been named to several developing rider lists and qualified for the 2020 Land Rover Kentucky 3 Day Event!  Below is a list of accomplishments by year.